STATUS AND USE OF PHOTOGRAPHY IN THE 19TH CENTURY

Almost twenty years after Nicéphore Niepce’s early experiments, photography officially entered the annals of history on 7 January 1839, when François Arago, physicist, astronomer and Republican member of the French Assembly, presented the “daguerreotype”, a process invented by Louis-Jacques Daguerre, to the Parisian Academy of Science.
From then on, there was an open debate, especially within the walls of France’s Academy of Fine Arts, between the supporters and detractors of this new means of producing images. The basic argument revolved around the following questions: was photography a “mechanical” tool for capturing reality, or did it leave room for an interpretative and expressive approach? In other words, was a photograph a document or a work of art? While Pictorialist photographers such as Stieglitz, Käsebier, Langdon Coburn and Steichen endeavoured to have photography recognized as an artistic medium in the 1890s, this status was not really acquired until after World War II.

“Statues, busts, and other specimens of sculpture, are generally well represented by the Photographic Art; and also very rapidly in consequence of their whiteness. These delineations are susceptible of an almost unlimited variety: since in the first place, a statue may be placed in any position with regard to the sun, either directly opposite to it, or at any angle: the directness or obliquity of the illumination causing of course an immense difference in the effect.” (The Pencil of Nature, London, Longman, Brown, Green and Longmans, 1844)

EVIDENCE FOR THE DEFENCE: THE PHOTOGRAPHS OF THE AGE OF BRONZE

Photography’s affinity with sculpture, as well as its documentary and evidential value, may explain Rodin’s early interest in this new medium. In 1877, his submission to the Paris Salon, The Age of Bronze, was the subject of huge controversy. Its critics accused Rodin of not having modelled this male figure, but of having used a life cast. The sculptor reacted by employing photographer Gaudenzio Marconi, who supplied art students with images, to take a series of shots of both the plaster version of The Age of Bronze and Auguste Neyt, the model who had posed for the work, so that they could be used as proof in his defence. This decision shows how irrefutable Rodin considered photographic evidence to be. In fact, as Michel Frizot explains, he chose to prove his innocence, not by producing a live cast of the actual model in the same pose, but by comparing photographs of the plaster version of the work and the sitter.
On several occasions Rodin made remarks expressing his reservations about photography, limiting it to its capacity for accuracy and elementary realism, not considering it to be a means of expression or artistic discipline in its own right. His famous outburst against photography “which lies”, as related by Paul Gsell, is a brilliant illustration of his standpoint:

“If, in fact, in instantaneous photographs, the figures, though taken while moving, seem suddenly fixed in mid-air, it is because, all parts of the body being reproduced exactly at the same twentieth or fortieth of a second, there is no progressive development of movement as there is in art. […] it is the artist who is truthful and it is photography which lies, for in reality time does not stop, and if the artist succeeds in producing the impression of a movement which takes several moments for accomplishment, his work is certainly much less conventional than the scientific image, where time is abruptly suspended.” 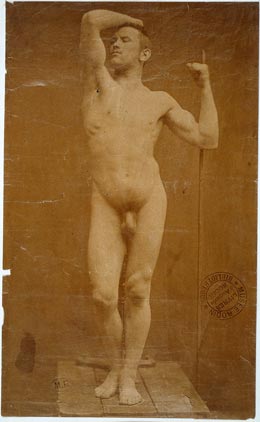 Rodin’s concept of photography was in line with the prevailing views held in his day: photography’s merit lay in its documentary precision, its ability to reproduce mechanically, faithfully and with neutrality,and not in any artistic capacity. Yet the photographic image, strictly factual and documentary in Rodin’s eyes at the time of The Age of Bronze, would soon become part of and then influence his creative process, although he apparently never used a camera himself. As the medium that put his works into public circulation, photography also helped maintain his reputation as an artist.

Rodin was a keen collector and an imaginative user of photography. By the end of his life, his collection and archives numbered no less than 7,000 prints. The nature and quality of these photographs differ, combining documentary and artistic images. Their themes and subjects are worth commenting upon further.

1) Rodin’s collection of photographs includes pictures of architecture, landscapes and academic nudes assembled by the sculptor himself. Although these photographs are very good quality, they are not the outstanding feature of his collection: rather, part of a stock of photographs used by artists of his period in the elaboration of their compositions. 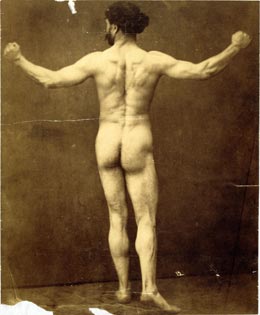 2) Photographing artworks became popular in the 1850s. As was common practice among sculptors during this period, Rodin had his works photographed as soon as they were shown at the Salons, from the early 1870s onwards. These pictures were intended for his own personal archives, for his patrons or the purchasers of his sculptures, as well as for publication in art reviews to ensure his works reached a broader public. Rodin employed specialist photographers, such as Gaudanzio Marconi, Karl Bodmer, Victor Pannelier and E. Freuler....

An objective viewpoint, direct lighting and precise contours were the main characteristics of these photographs that kept track of his studio production, essentially during the period of Rodin’s commissions for monuments in the 1880s, when his activity had increased to such a point that he was using four studios, in and around the Dépôt des Marbres. These photographs, sometimes kept together in a file, enabled Rodin to follow the different stages in the gestation of a sculpture, as did the clay models from which he had plaster casts made.
Although Rodin used photography mainly for documentary purposes at this time, he soon began looking for photographers who were other than simple technicians and could propose a more artistic vision of his work. In 1896, he thus employed Eugène Druet, an amateur photographer and the owner of café that Rodin had patronized since 1893. In 1900, after the two men had temporarily fallen out while preparing for the exhibition in the Pavillon de l’Alma, Jean Limet, another amateur photographer and the patinator of Rodin’s bronzes, was commissioned to take the photographs to be published in the catalogue. The remarkable fruits of his investigations into colour can be seen in his bichromated-gelatin prints.

Encouraged by Rodin, Druet became a picture dealer in 1903. The sculptor then signed a contract with the publisher Jacques-Ernest Bulloz, who brought out a portfolio of photographs of Rodin’s sculptures that same year.
In 1896, at an exhibition held at the Musée Rath, in Geneva, Rodin showed photographs for the first time alongside his sculptures and drawings. He was so pleased with the experience that he repeated it, notably at the Pavillon de l’Alma exhibition, where 71 photographs were displayed next to his sculptures and drawings.

3) Rodin frequently retouched the photos of his sculptures in pencil, pen or with a brush, but for several different reasons:
Some of the pencil or ink amendments indicated the corrections to be given to the photographer (e.g. to emphasize a shadow), or to the engraver when the photograph was to be published. For Rodin, retouching a photo was often a vigorous exercise, as his pen strokes inked out whole areas of the image.
The sculptor also used retouched photographs as a starting point for his illustrations of Baudelaire’s Flowers of Evil.
Many of these photos with amendments correspond to Rodin’s different ideas about the work in progress: photography was a tool that helped him to project a mental image of the sculpture. Rodin gave his photographers strict instructions as to how he wanted these photographs to be taken. They served as an aid in the gestation of a sculpture. The amendments Rodin made to them represented the changes that he envisaged making. This rapid retouching of the photos in pen, pencil or ink wash enabled him to fix in his mind exactly what he wanted to do before reworking the plasters. According to Michel Frizot, Rodin regarded the photographic medium as “a transaction surface” that allowed him to rework a creative idea visually rather than manually.
Some of these modifications, however, were never transposed onto the sculptures, and the photographs thus retouched, notably with gouache to isolate the figure, in which the image became an end in itself, acquired the status of artworks in their own right.

4) Rodin proved to be very sensitive to how other artists regarded his works. Among the photographers with whom he preferred working were Edward Steichen, Alvin Langdon Coburn, Gertrüd Käsebier, Stephen Haweis and Henry Coles.

On Rodin’s death in 1917, his archives and collection of photographs sank into oblivion, despite the numerous acquisitions made by Léonce Bénédite, the Musée Rodin’s first curator, who completed the existent, already substantial, body of work. Rediscovered in the late 1960s, it was not truly brought to light again until the 1970s.
In 1979, an article on Druet was included in the catalogue of a Rodin exhibition held in East Berlin. In 1981, the photographs of Rodin’s works featured prominently in the vast Rodin retrospective organized in Washington by Albert Elsen and Kirk Varnedoe.
Since the 1880s, the Musée Rodin has laid the emphasis on studying, conserving and highlighting the importance of the photographic collections and archives. Today these contain approximately 25,000 photgraphs.