THE MONUMENT TO BALZAC: A SOURCE OF CONTROVERSY

In 1898, when Rodin first exhibited his monument to Balzac at the Paris Salon, it caused a huge scandal. The Société des Gens de Lettres, who had commissioned it several years earlier, refused to accept the statue. Their main criticism, as the French newspapers eagerly reported, concerned Rodin’s aesthetic approach, which challenged the conventional idea of a public monument by not making the writer easily recognizable. The international press got hold of the story about the controversy raging in the Parisian art world, and an article was even published in a Milwaukee (Wis.) paper. Paradoxically, it was because of this scandal that the American photographer Edward Steichen first heard about and eventually met the French sculptor. Steichen (1879-1973), who was not yet one of Pictorialist photography’s foremost exponents, discovered Rodin’s Balzac on seeing the picture illustrating the article in his local paper. It made a deep impression:

“It was not just the statue of a man; it was the very embodiment of a tribute to genius. It looked like a mountain come to life. It stirred up my interest in going to Paris, where artists of Rodin’s stature lived and worked.” (Steichen, A Life in Photography, 1963)

Steichen began his professional career as a lithographer in Milwaukee, in 1898. Having taught himself painting, he also devoted his energies to photography, feeding his passion for art by reading books on art history and photography magazines. These were then becoming increasingly popular due to the emergence of Pictorialism early in the decade. This international movement subscribed to the idea that photography was an artistic genre in its own right. The multiple experimental techniques used to obtain different effects during the development process were among its notable characteristics. The First Philadelphia Photographic Salon, held at the Pennsylvania Academy of Fine Arts in 1898, included the works of Alfred Stieglitz, Clarence H. White, Gertrude Käsebier and Fred Holland Day. The following year, Steichen was accepted as one the participating photographers. This success gave him the confidence he needed to go to Paris.

Before leaving for Europe in 1900, Steichen met the photographer Alfred Stieglitz in New York. Already leader of the Pictorialists, he was also the future editor of the photography journal Camera Work, and founder and director of the Little Galleries of the Photo-Secession on Fifth Avenue. The young Steichen showed him his paintings and photos and was duly encouraged by the master.

On his arrival in Paris, Steichen visited the exhibition that Rodin had mounted on the Place de l’Alma. He saw the plaster cast of Balzac and was much impressed, but too shy to approach the sculptor who happened to be present.

Steichen settled in Montparnasse and continued working as a painter and photographer, soon exhibiting his paintings regularly at the Salon de la Société Nationale des Beaux-Arts, then at the Salon d’Automne, Paris, while his photographs were shown at the Art Institute of Chicago, the 291 Gallery in New York (as the Little Galleries were renamed in 1908), and at the Royal Photographic Society, London.

Moving in the international artistic circles of Montparnasse, in 1901 Steichen met the Norwegian artist Fritz Thaulow, who found his paintings interesting. In turn, Thaulow introduced him to Rodin, whom he had given several of his own paintings c.1896. Rodin liked the photographer enough to invite him to his Meudon studio over a period of almost a year. Steichen did a series of portraits of the sculptor, as well as taking a very large number of photos of his sculptures.

On his return to New York in 1902, Steichen opened his own portrait photography studio, from which he earned enough to ensure his livelihood. From 1905-06 onwards, he also influenced Stieglitz to some extent in drawing up the programme of events at the 291 Gallery, which the latter wanted to open up to include all art forms, not just photography.

In 1906, he returned to France, this time accompanied by his family. Until the outbreak of World War I, Steichen split his time between France and the United States. Still somewhat in awe of Rodin, he wanted to hold a show of his drawings at the 291 Gallery (the exhibition took place in 1908). The two men had become close friends. Rodin would be godfather to Steichen’s second daughter, named Kate Rodina as a tribute to the sculptor.

In 1908 – ten years after the controversial reaction to Balzac – Rodin launched a major photographic campaign of his statue, following an increase in public interest, notably due to the opening that year of the Maison de Balzac, to which Rodin had donated a plaster model of his monument. The writer’s life and work once again hit the headlines, as did his portrait by Rodin, who again defended his sculpture in an interview that he gave to the daily newspaper Le Matin.

Furthermore, Rodin’s works, including his Balzac, had ben the subject of frequent articles in newspapers and periodicals since the late 1890s. Several authors had written books about him, monographs, too, all abundantly illustrated. But pictures of Balzac were few and far between, and there were hardly any full-length shots of the monument. Rodin therefore decided to rectify the situation by commissioning a major photographic assignment. He contacted three photographers: Jacques-Ernest Bulloz, a professional specialized in pictures of art works; Jean Limet, a bronze patinater and amateur photographer; and Edward Steichen, a painter and photographer already acclaimed in his field who was the sculptor’s friend, and still as admirative as ever of his work.

THE PHOTOGRAPHIC CAMPAIGN OF 1908

In autumn 1908, informed by a letter from Rodin that the plaster cast of Balzac had left the studio (it had not yet been cast in bronze, since the statue had been refused), and that he could photograph it, Steichen set to work. First of all, he photographed it in the daytime. Struck by the strange appearance of his statue at night, Rodin asked Steichen if it would be possible to photograph it in the moonlight. This idea appealed to the American, whose own pictorial investigations attest to his keen interest in nocturnal effects. For two nights running, he explored the hitherto-untried technique of using his camera by moonlight: the first night he experimented with different exposure times; the second night, he concentrated on the actual photographs, moving his (6 x 8 inch) view camera as the moon made its way across the sky. He carefully noted the time at which the photographs were taken: on the hour between eleven o’clock at night and four in the morning. The weak light conditions demanded a very long exposure time (between half an hour and two hours) and he was uncertain about the results he would obtain.

As soon as Steichen realized that his moonlit negatives had come out well, he sent a telegram to an anxious Rodin, waiting impatiently to see the pictures. The prints, on the other hand, took longer to develop.

Steichen shared his enthousiasm with Stieglitz, telling him he how he had photographed and painted Rodin’s Balzac, which had been brought outside, and how he had worked by moonlight, spending two whole nights from sunset to sunrise on it, and how fabulous a commission it had been. But the young photographer did much more than what Rodin had commissioned: he thought deeply about the vision of the statue that he wanted to capture in photography, which would require long hours of work in the laboratory. As the nocturnal effect he was seeking could not be obtained from a single plate, Steichen explored the possibilities offered by development processes combining two different techniques on the same print (e.g. gum bichromate or carbon print on platinotype), followed by retouching with a dry brush and colour toning effects, to enhance the moonlit atmosphere. The result marked a decisive turning-point in Steichen’s career, and was perhaps the apex of Pictorialism.

The ghostlike appearance of the statue’s silhouette inspired Judith Cladel, Rodin’s first biographer, to write the following lines: “On moonlit nights, white and almost phosphorescent, he surged out of the pool of shade covering the ground and stretched his owl-like mask towards the light, like a creature from the world of the occult who has to go back. Rendered visible to profane eyes, he looked like the astral double of the immortal writer. He sent the same shudder through the soul as the ghost of Hamlet’s father when he appeared on the cliff of Elsinore.” 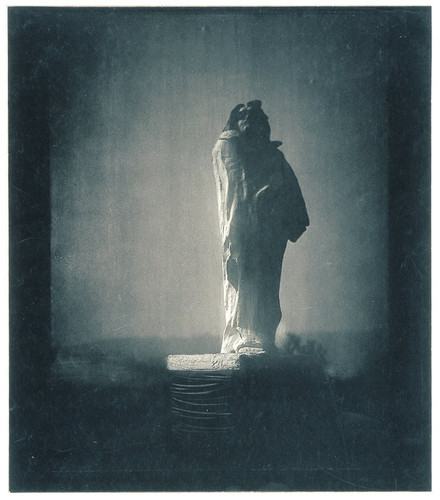 Rodin was profoundly moved when he saw the photographs: “It is Christ walking in the wilderness,” he said to Steichen. “Your photographs will make the world understand my Balzac.” To thank the photographer, Rodin gave him a bronze cast of The Walking Man.

Steichen’s photos of Balzac were thus shown across the Atlantic: Stieglitz exhibited them in his 291 Gallery in New York in spring 1909, then published them in 1911, together with an article by Charles H. Caffin, in the prestigious journal Camera Work which he had founded in 1903. Extremely proud of this publication, Rodin obtained about thirty copies, only one of which has survived in the museum’s collections today, proving that they had been widely distributed, probably for promotional purposes.

AN ART WORK IN ITS OWN RIGHT

While multiple prints and enlargements were made of the photographs of Balzac (to be published, sold or given to collectors) in different formats and employing different techniques, Steichen’s paintings of the statue have all been lost except for one, the artist having burnt the rest in the 1920s. The surviving work, Shrouded Figure in Moonlight is now in the Sheldon Museum of Art, University of Nebraska-Lincoln. The original glass plates of Balzac, stored in the Steichen family’s holiday home in Voulangis, were damaged and destroyed by damp. All that is left today are the prints in which Steichen portrayed his vision of Balzac, midway between Symbolism and Pictorialism.

After World War II and Rodin’s death, the photographer moved into journalism, before becoming, in 1947, the first Director of the Department of Photography at the Museum of Modern Art, New York, a museum that has a cast of Balzac in its sculpture garden. 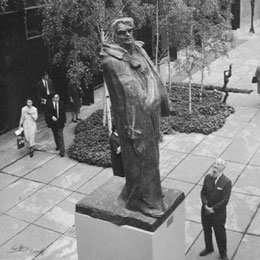